The prospect of combining two genres is always an exciting, but risky, idea. There have been success stories in the past, such as with Crypt of the Necrodancer combining the rhythm and adventure genre. Taiko No Tatsujin: Rhythmic Adventure Pack attempts to bring the complexity of the RPG genre and combine it with the simplistic rhythm games the Taiko No Tatsujin series is best known for. This collection, a compilation of two games originally released on the 3DS, marks the first time the Rhythmic Adventure series makes its debut in the west. Unfortunately, putting two games in one package cannot hide how basic and rudimentary these games really are. 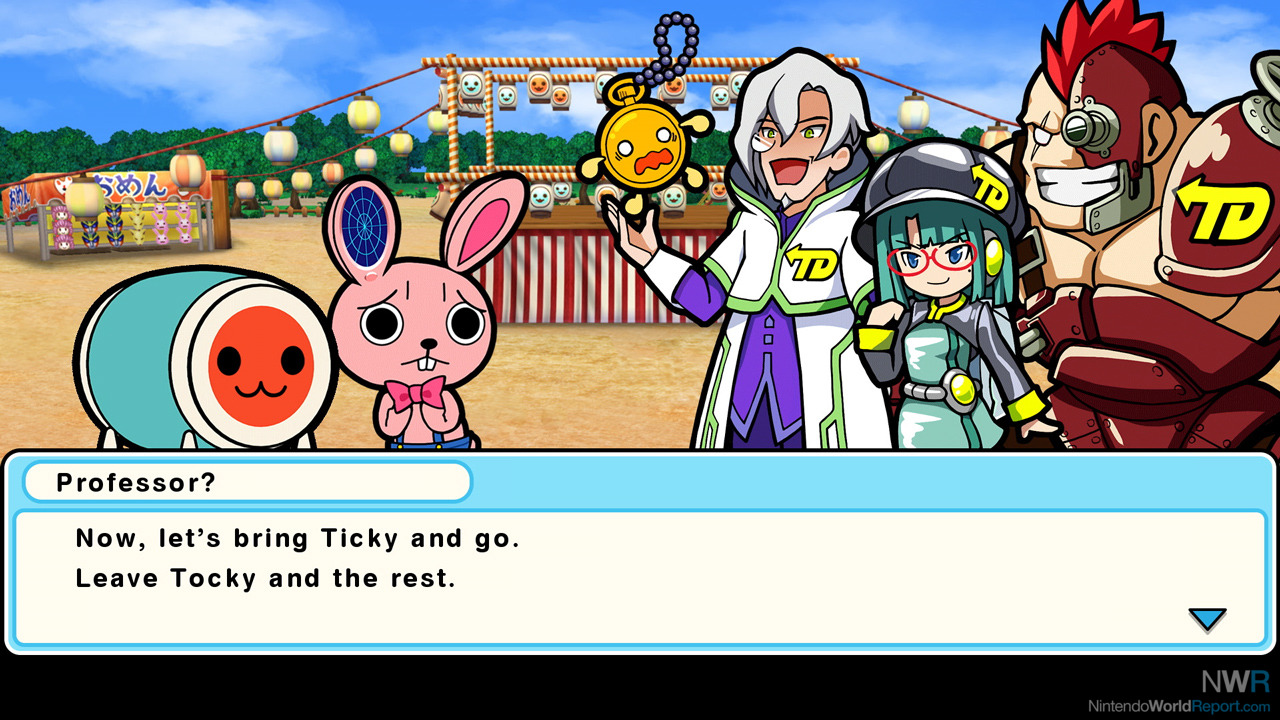 While there are two games included here, Rhythmic Adventure 1 and 2 are practically the same game in different scenarios, with the sequel adding many quality of life improvements. The story of the original game follows Don and Katsu, two taiko drums, meeting a rabbit named Tacky who implores the help of the drums to rescue his watch friend, Ticky, who can control the power of time. The group sets out on a time traveling journey to stop the villains who took Ticky from destroying the world. In Rhythmic Adventure 2, Don and Katsu visit a traveling museum when a girl, Tia, and a monkey, Popo Kaka, appear and ask the duo for help getting back a stolen item, the Necklace of the Lion’s Fang. The necklace was stolen by a group of villains who are trying to destroy the world. Sound familiar? Both games’ plots are virtually identical, merely existing as a reason for Don and Katsu to travel through time and across the globe. The plot plays out as simply as one would expect, and for a game with so much dialogue, it is a shame the plot was as superficial as it was. 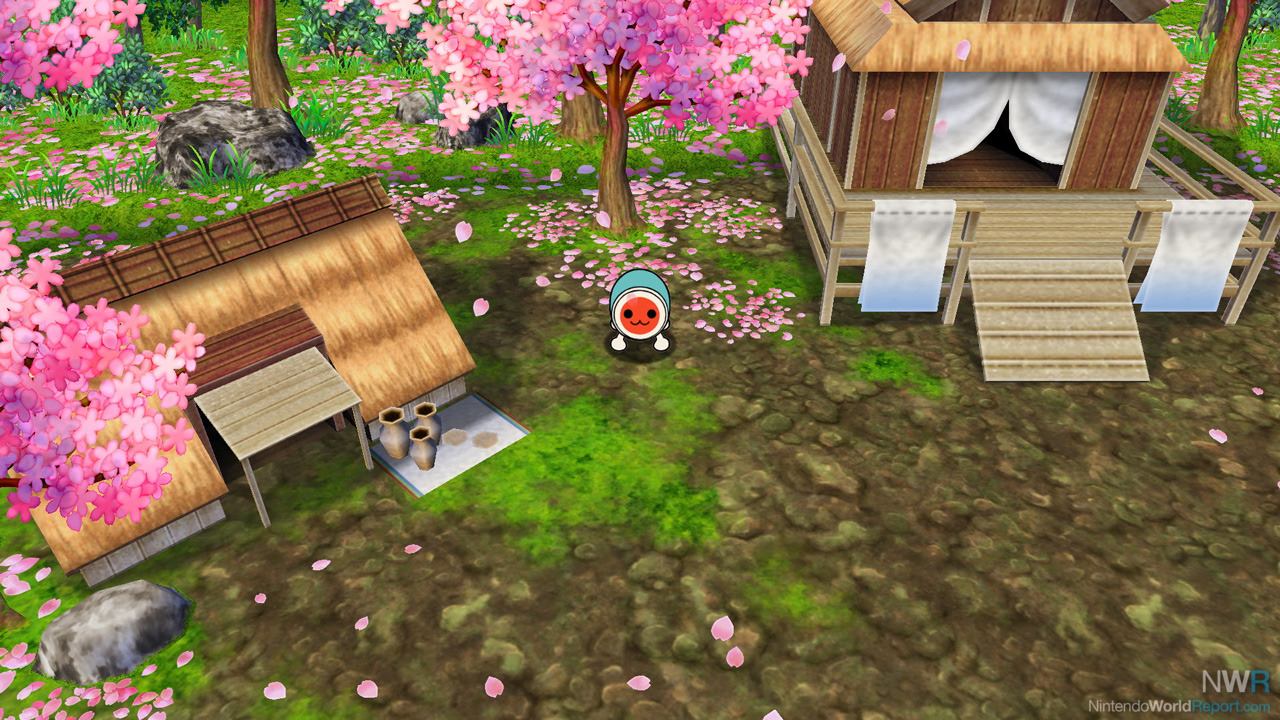 Speaking of simple, the game aims to create an RPG experience for a much younger crowd, especially in the first game. Like all RPGs, gameplay is divided between an overworld and combat. The overworld is ultimately bland and boring. While each character’s sprites are hand drawn and cartoony, the backgrounds are more realistic, looking much more like a traditional RPG. This causes the characters to stick out against the environment like a sore thumb and combined with the minimalistic animations of Don, makes the characters look like PNGs slapped on a background. Even when you ignore the graphical style, the world is extremely linear, empty, and boring. Besides the occasional treasure chest or two, there are no incentives to explore the world or do anything besides fighting random encounters to grind levels. Even the towns serve nothing more than a change of scenery with a shop or two to visit to buy new gear or some items. 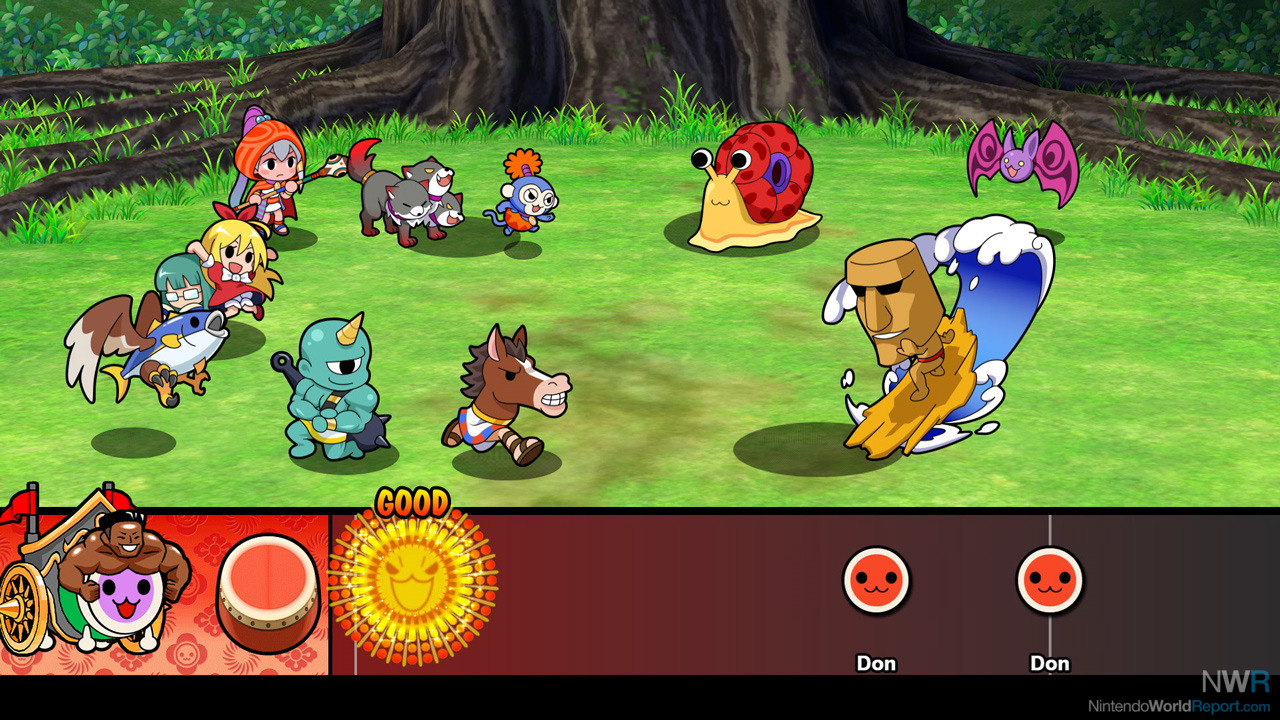 The problem with the world outside of combat is Rhythmic Adventure’s simplicity, the battle system is truly the worst part of the game. For the most part, battles are random encounters in between towns. Don’s party gets attacked by a group of creatures and is challenged to a battle, which is just a standard round of the regular Taiko no Tatsujin style gameplay. As a song plays, different colored notes need to be pressed at the right time to get an OK or Good rating. If successful, every few notes the player’s team attacks, if enough misses occur, the enemies attack. Once each opponent’s health bar reaches zero, the round ends. That is, unless the song finishes first, which causes the round to end in a draw and the battle also ends. This draw mechanic destroys the pacing as sometimes there are far too many enemies on screen to take out before the song ends. It also doesn’t help that the songs vary in length, meaning sometimes it is just up to luck whether a lengthier song is chosen to help you win the battle. There are some ways to mitigate this, such as grinding for levels to deal more damage or changing up your party, but even that is entirely up to luck as recruiting new team members is mostly locked behind a random chance of recruiting one after a battle. Even then, songs are repeated too frequently and playing the same song over and over again loses its appeal really quickly. Ultimately, this battle system is not an RPG battle system, but a regular Taiko No Tatsujin song masquerading as one.

Luckily, Rhythmic Adventure 2 tries to improve on the flawed formula with some band-aid solutions. Overworld encounters are no longer random encounters and instead appear as colored silhouettes that correspond to the difficulty of the encounter. Additionally, you can now shoot Katsu out towards enemies to nullify the battle, which is useful for avoiding unwanted encounters. The party system has also been enhanced, with the player now being allowed to set team formations and recruit allies through a gacha system in the main hub. While these are great improvements, they do not fix the overall battle system and the lackluster overworld, which is a real shame. 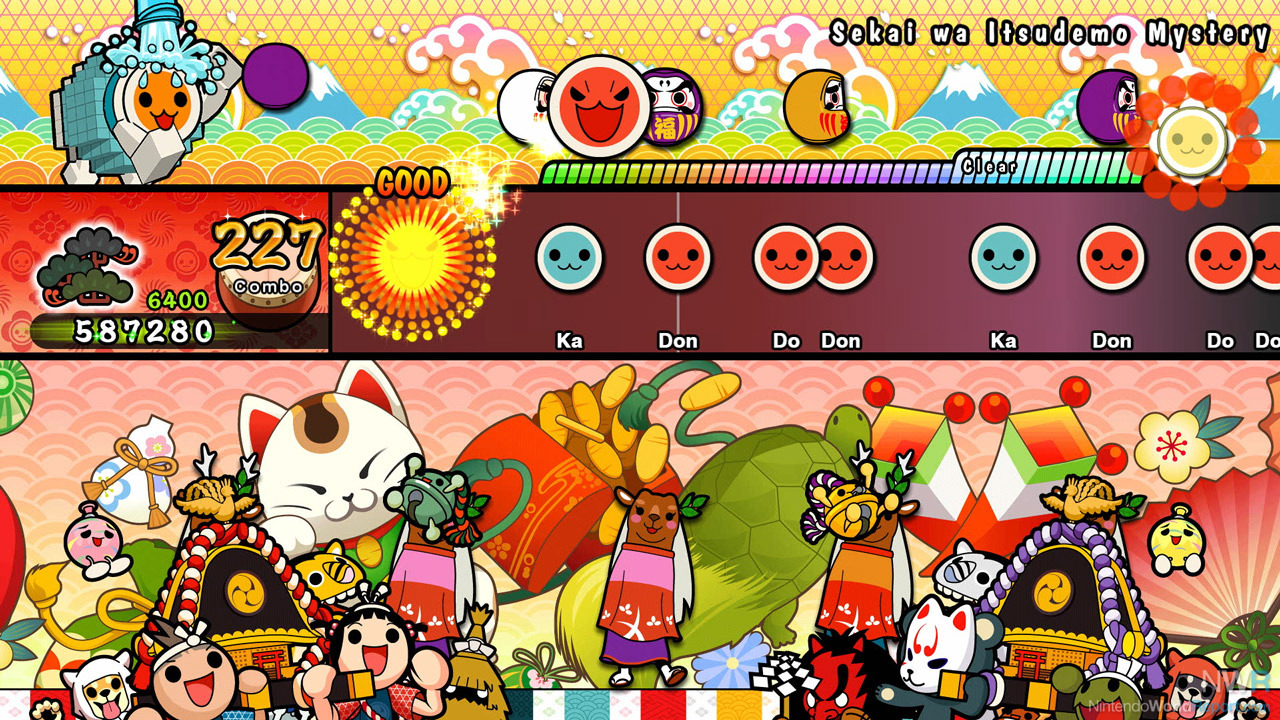 In terms of side content, this is where the Rhythmic Adventure Pack tries to redeem itself. Each game includes their own Taiko mode, which is just regular Taiko No Tatsujin style gameplay. As this is what the series is known for, this mode is where the most enjoyment will likely be had. There are six new songs added to this rerelease, which is a nice bonus until you realize that none of the DLC songs from the original 3DS releases are included. This is a real shame as they are not even available to purchase separately, making a chunk of the game feel like it is missing. The overall song collection is robust nevertheless, with over 130 songs, including some crossover songs, such as an Ace Attorney medley and a Kirby medley. However, probably the biggest letdown is that none of the songs are localized, meaning even some songs players might be familiar with, such as the Pokemon XYZ anime theme song, are not recognizable in the slightest when compared to their English counterparts. While this game is clearly marketed as a Japanese product, there is such minimal effort done to the localization process to make one wonder why it would be worthwhile to localize it in the first place. None of the songs, voice acting, or lyrics are translated, which is a real shame as there was potential for a fun time in Taiko mode for those who were unimpressed with the main story.

While it is impressive Taiko No Tatsujin Rhythmic Adventure Pack was made available to the Western market for the first time, it ultimately feels like a lackluster package that only a handful of people will get enjoyment out of. The story mode is too simple and repetitive to be worthwhile, while the Taiko mode’s minimal localization and lack of translations feel half baked, especially to those who don’t speak Japanese. While Rhythmic Adventure 2 is clearly the better game, neither one comes with a recommendation, especially on a system that is home to some fantastic RPGs and rhythm games.