I’ve never made a secret about my general uninterest in sports. Whether it’s either watching or participating in sports, I tend to avoid most things related to them. Not because I think sports lack an inherent value, but for me personally I never happened to find enjoyment in moving around without a clear goal, getting tired, and having to watch other people who are in far better physical condition than I am. But drastic times call for drastic measures, and while this pandemic has, thankfully, not impacted my personal life as much as others, I still found myself unable to go out for a walk or cycle as much as I used to (For context, here in the Netherlands, cycling is just the primary mode of transportation, so I personally don’t think of it as a form of exercise for me). So when the opportunity to review Fitness Boxing 2: Rhythm & Exercise arose, I thought that it might be a good shot to get me to do more moving. What I wasn’t expecting was one of the toughest workouts I’ve had in a long time. 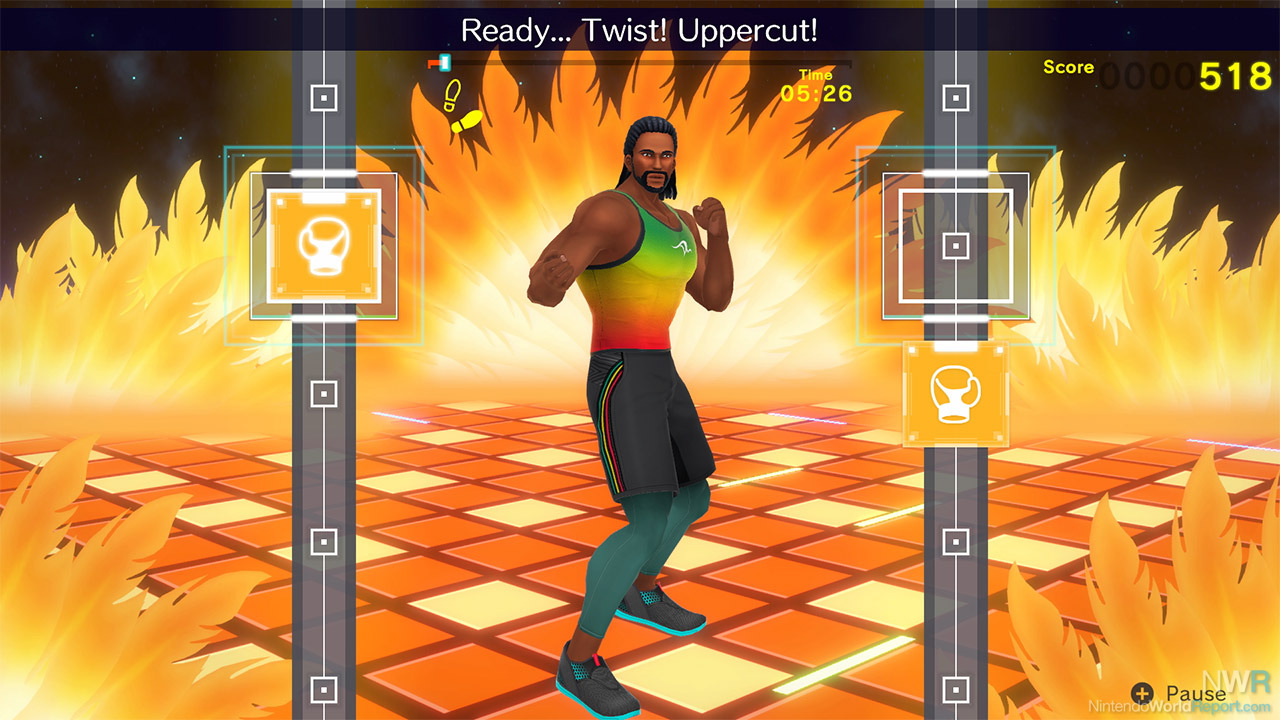 Before I get into the specifics of Fitness Boxing 2, I should add that I have had a couple of exercise games in the past: Wii Fit and Wii Fit Plus being the primary points of reference to me. Even though I did try Ring Fit Adventure once during an event, I will largely avoid that comparison for lack of time with the game. So, what is Fitness Boxing 2? To describe it simply, it’s an exercise game that uses music to get you to move in rhythm to the beat. Unlike Just Dance, however, here it’s not so much about tracing specific dance patterns as it is imitating certain boxing movements. At all times, you are required to move back and forth on your feet in rhythm to the music while throwing all sorts of punches that use your core muscles, biceps, hips, and everything in between. The variety of punches is surprisingly wide, switching between uppercuts, jabs, straights, and hooks in a variety of sequences. There’s also a couple of tutorials where you can practise these punches to get a feeling for them, which I would highly recommend.

During gameplay, there are two tracks that show the rhythm of the song with the timing for the left and right punches. Your goal is to time your movement just right to throw out your punches in time with the beat. Points are added for good timing and add to your combo meter, which fills over time. Once the combo meter is full, you gain additional points and the background changes to a more dynamic visual style. Daily routines are the primary way of engaging with the exercises. You can set a preferred duration of exercise varying from 10 to upwards of 40 minutes. These daily routines have you participating in a variety of movements, such as one focusing just on jabs and straights, while others introduce new boxing techniques. 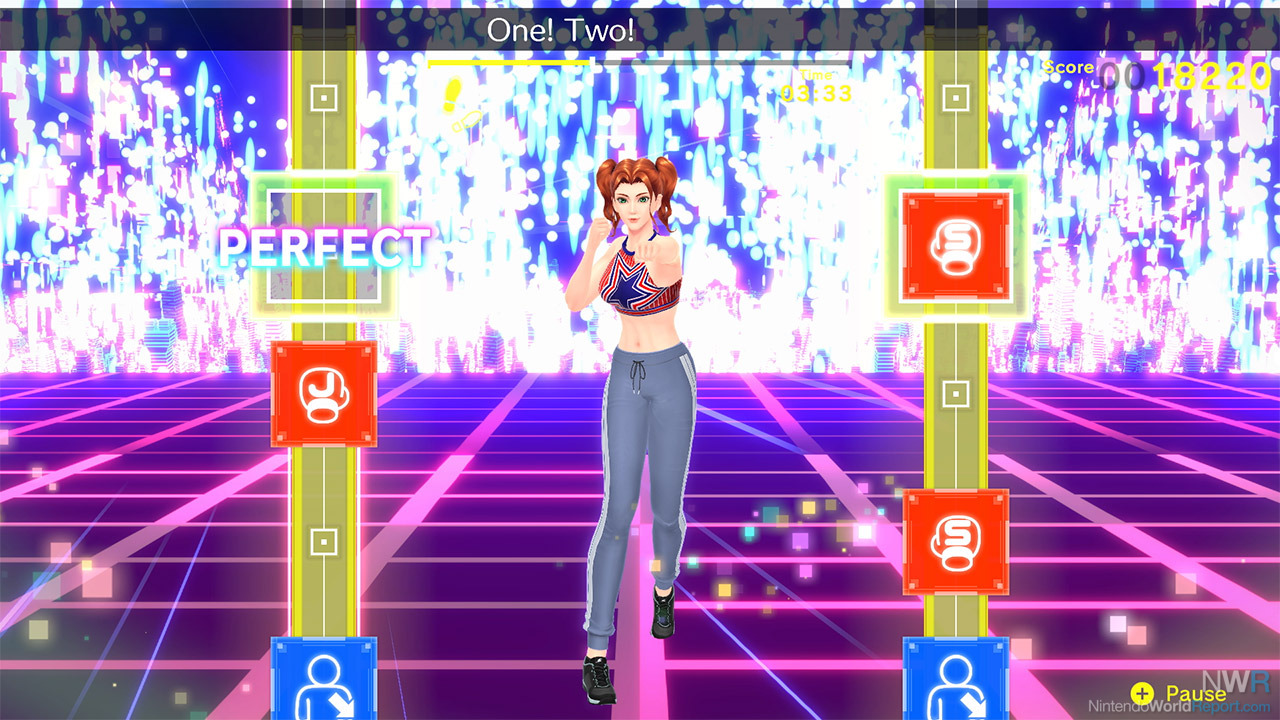 What surprised me most was the intensity and pacing of the game. Wii Fit always bothered me with long menus, slow introductions to the exercises and needing to spend a lot of time waiting before jumping into the yoga poses or other activities. Fitness Boxing 2 does not mess around. The daily routine is an intense workout that does offer up a bit of a breather during the exercises, but mostly barrels full steam ahead for the duration of the exercises. I found the uppercut combo regiment to be particularly brutal: a near 15-minute non-stop workout switching between jabs, straights, uppercuts at a breakneck pace. After every daily workout, I could feel the sweat dripping down my face and body. Following along with moving your whole body gives you a full workout unlike any I’ve experienced in a game before. I can commend it for this dedication and lack of compromises. Once you commit to an exercise routine for the day, you will feel the burn.

That being said, there is a core drawback to Fitness Boxing 2. The game does feel lacking in the registration of motions and full body movements. While the Ring Fit device can accurately measure your type of exercise due to the clever implementation of both Joy Con, in Fitness Boxing 2, it feels like a return to the days of Wii-mote waggles. The accelerometers do calculate different movement speeds for the types of punches, but since you are using two Joy Con for your punches, there is a distinct lack of checking your pose and body movements during the exercises. For example, having to move back and forth like you are a boxer on your feet is something that is encouraged, but is impossible for the game to check. Even when you slip up, the game doesn’t correct you but instead the instructor spouts the same motivational speech and reminds you to use your full body. This gets repetitive very quickly and while in the moment it helps you to change your form, if you are playing the game right, there’s still the same reminder ever so often. This makes the game feel less like a game and more like one of those old VHS exercise tapes, where you are expected to move along to the tape, but nothing is stopping you from half-assing most of the workout. 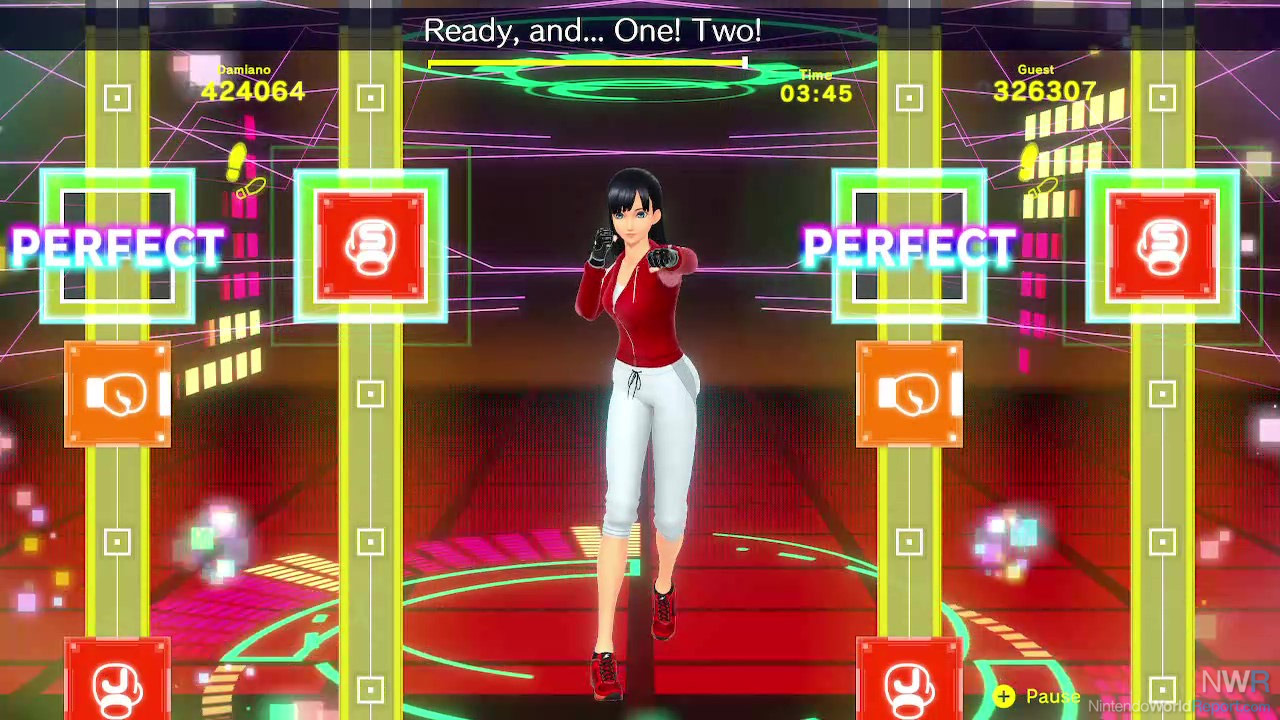 As far as presentation goes, I’d call Fitness Boxing 2 a step up from Wii Fit. There’s a nice variety of instructors to choose from. You even unlock tickets that you can spend to give them new outfits and change their appearance. Though, it does feel like the game rewards you with tickets for every little single action you perform. Even checking different menus and changing options rewards you with tickets. This meant after just two days I’ve had about 80 tickets, but barely unlocked any cosmetics to spend them on, which came across as lackluster. At least give me as a player a goal to work towards with these unlockables. The music selection is varied, but did start to grind on my nerves after a while. There’s about five original songs, but you do unlock more beats from pop-songs you probably have heard off. I do have to stress that I’m talking about just the beats of these songs. Hot ‘N Cold, YMCA, September, and House on the Hill have a distinct lack of lyrics and have clearly not been licensed but covered by other artists. These tracks are catchy enough during the workout to keep you going, and the fact that you can swap tracks between different exercises is a great touch. Listening to a covered lyric-less version of YMCA for 25 minutes straight would’ve severely impacted my enjoyment. Finally, there are options for different backgrounds and they range from “discount wii fit studio” to “trippy visual confusion,” but they get the job done. The presentation does what you’d expect but has very little distinct flavor of its own. Like Wii Fit, its function over form on all fronts.

So should you pick up Fitness Boxing 2: Rhythm & Exercise now that sporting locations might’ve been closed down? Well, it depends. If you are looking for an intense workout to spice up your own gaming routing, then Fitness Boxing 2 will definitely get you sweating. In the longer term, I do believe that a game like Ring Fit Adventure may be more rewarding from a gameplay perspective. Fitness Boxing 2 is above all an exercise tool and not a game, per se. That doesn’t diminish its value, but I do think that it should serve more like a supplemental addition to getting you to exercise. It’s a better Wii Fit, in the sense that Fitness Boxing 2 trims the fat (ha!) that were the slow exercises and loading times. But much like Wii Fit, I cannot guarantee that it will maintain your interest for long or present enough new features over time. At the very least, you won’t have to stow away a balance board in a closet somewhere after punching out.