With these Game Boy RPGs, it’s worth going back in time.

What’s most notable about this package is that the FF Legends games were essentially trapped on Game Boy, never having been re-released outside of Japan. The Switch continues to make a fantastic home for portable Nintendo titles of yesteryear, and the look and feel of Collection of SaGa is consistent with the Game Boy entries in the Contra and Castlevania series from their respective Switch compilations. The title selection menu includes a worthy music arrangement and attractive presentation, but the options menu is a little threadbare: the one element that stands out is the ability to flip the orientation of the screen vertically, which intends to emulate the Game Boy experience but basically requires that you own a Flip Grip accessory. 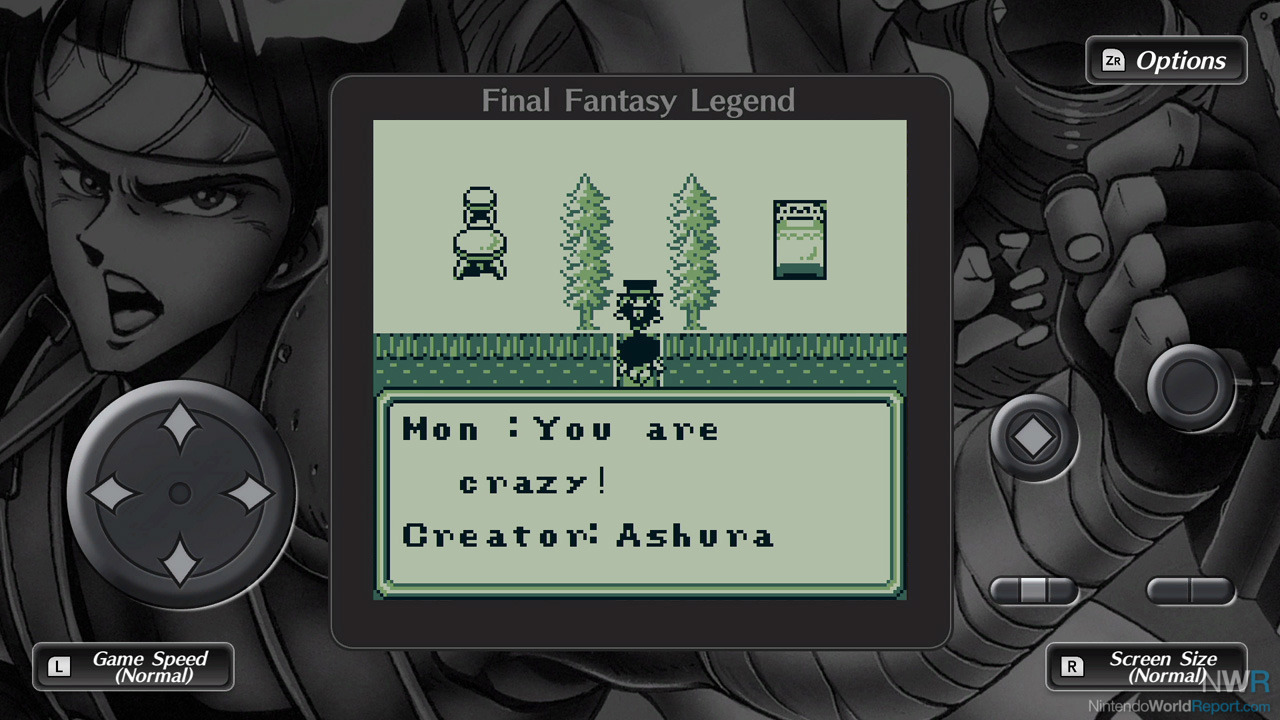 It’s the in-game options that are a little more interesting, but still somewhat lacking overall. The absence of save states is a little curious, even if each FF Legend game allows you to save your progress anywhere (not to mention you can immediately restart battles after defeat). Although you can toggle between normal and fast gameplay speeds, making grinding and exploration faster, the random encounter rates in each game are exceedingly high. An option to remove or reduce the number of battles you get into would have been welcome. Visual features include a normal or large main screen, eight different backgrounds, and changing the placement or eliminating entirely the virtual buttons.

Diving into The Final Fantasy Legend first, naturally, we find what may seem a simple RPG on the surface. However, the standard experience points system of earlier games on NES like Final Fantasy and Dragon Quest is replaced with a less obvious progression methodology. Journeying from world to world each taking up a floor of a giant central tower, players utilize a party of humans, mutants, and monsters. Humans improve by purchasing and using items that raise HP, strength, and agility. Mutants become more powerful through random stat bumps after combat, and monsters develop by consuming “meat” dropped from enemies. Talking to everyone you meet and doing a fair amount of grinding will help you eventually reach the conclusion of this fairly brief experience. 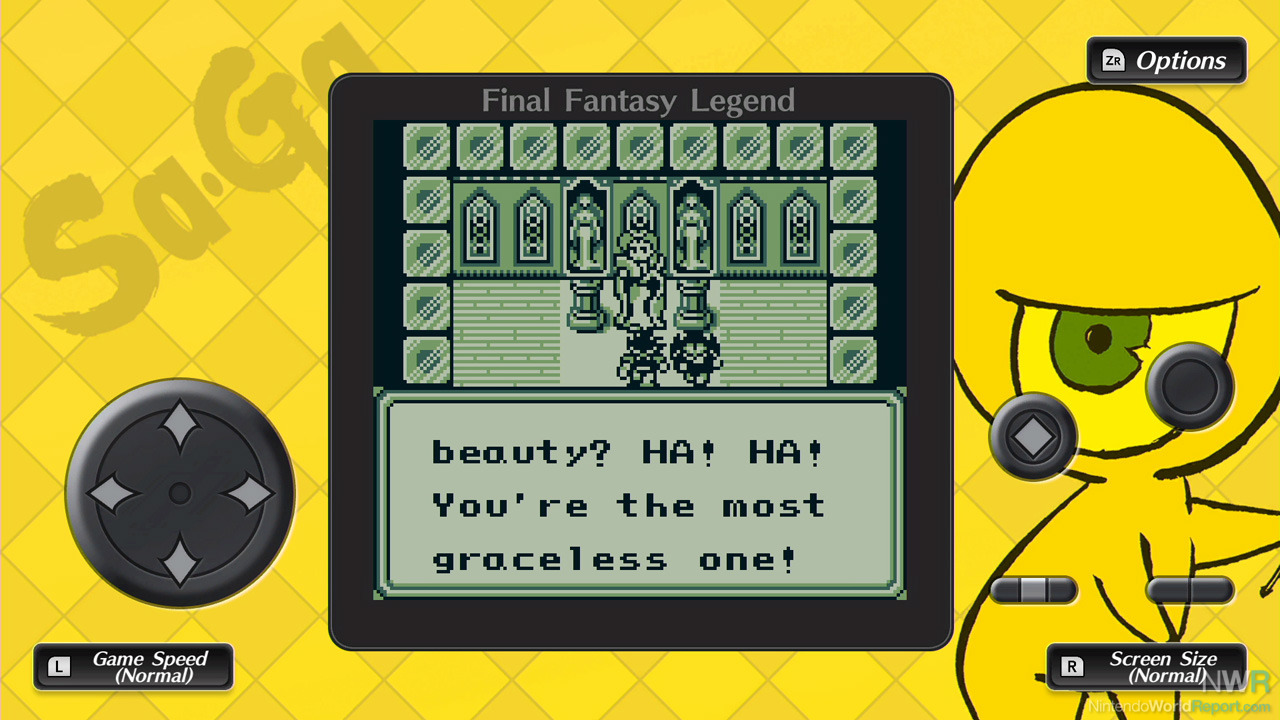 Final Fantasy Legend 2 adds a new race, Robots, a memo function, multiple save files, and a more compelling story. Progression changes slightly here in that humans and mutants both grow randomly through combat, with mutants continuing to learn and forget abilities at the end of battles. With four races to choose from, choosing your starting party of four, as in the first game, is a major part of the enjoyment. Here, however, characters can’t permanently be killed/removed from your party, which is a net positive over Legend 1. The primary objective of Legend 2 is collecting dozens of Magi items that can be equipped to provide buffs. The more you find, the more doors that open up and grant access to new worlds. The second game in Collection of SaGa ultimately holds up better compared to the first, but both are still worth playing.

The third and final entry in the set differs significantly from the previous two, both in content and gameplay. With SaGa creator Akitoshi Kawazu working on the first Super Famicom game in the series, a new Osaka studio handled Legend 3, and the differences are palpable. Returning to a more traditional RPG format, the last Game Boy SaGa game features experience points and standard level ups. The story involves time travel and a time machine known as the Talon that can even fire at enemies at the beginning of combat. Instead of characters named by the player, the four-person party have default names and figure much more prominently in the overall plot. Meat and parts can be used to change your party into one of six classes (Beasts and Cyborgs are the new additions), and the way in which these changes occur is easier to decipher compared to Legend 1 or 2. Final Fantasy Legend 3 is a great place for beginners to start and a definite highlight of the package. 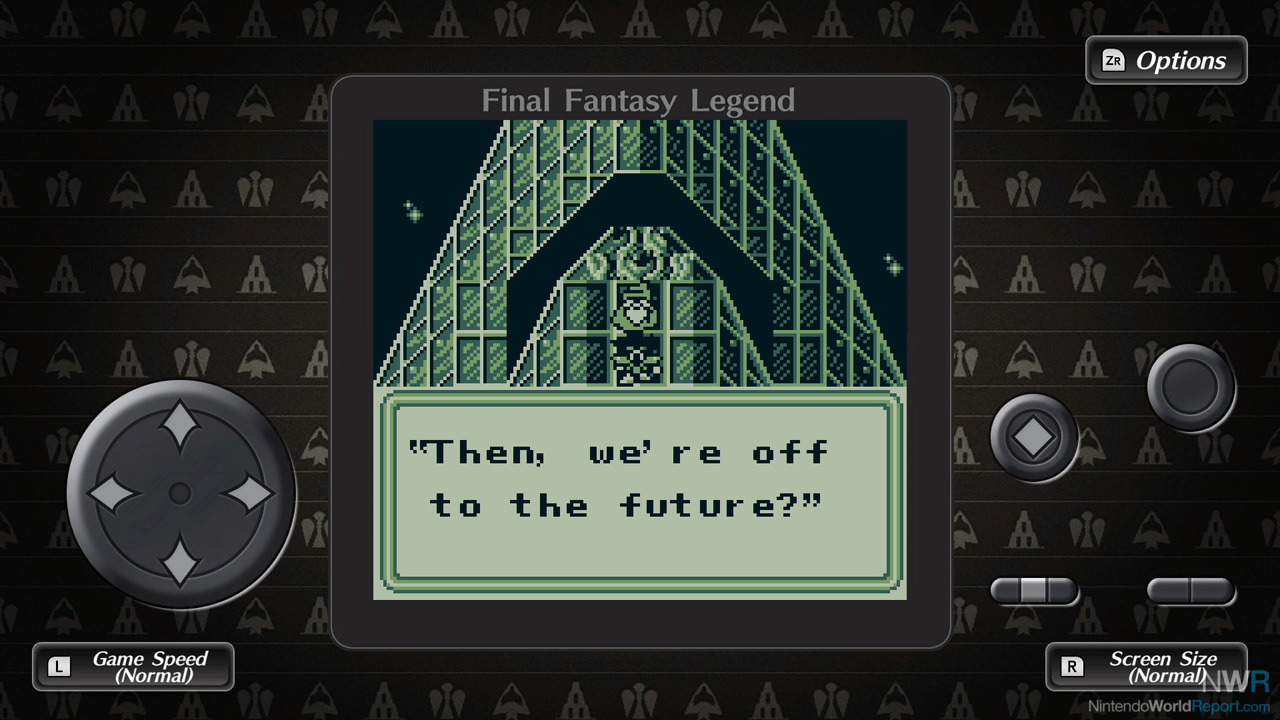 Personally, I may have gone into this review thinking that having nostalgia for one or more of these games was the best way to enjoy them in 2020. Fortunately, after returning to the first two and playing through Legend 3 for the first time, I can safely say that each one presents a unique and satisfying experience on its own. I actually regret not owning all of these games on my original Game Boy! One piece of advice is crucial, however, to getting the most out of these games: spend time to learn their mechanics. Whether you experiment on your own or look up the progression and races of Legend 1 and 2 in a guide, you’ll have a much better time if you figure out how to improve your characters. Grinding aimlessly will lead to frustration, and the fairly high encounter rate can be taken advantage of when you know how and why your characters actually grow. The bottom line with Collection of SaGa is that RPG aficionados, with or without prior experience, should add these classic titles to their Switch library. It’s great to see the saga of SaGa find a home on Switch, even if a little mental assembly is required to enjoy them.