The six games in the BIT.TRIP saga from Choice Provisions are all coming to Switch next week, and though I bought the full set of games at least twice the only one I really got into was the fourth one, BIT.TRIP Runner. However, it’s also the one that had the biggest brick wall in the form of one notoriously hard stage. Despite my reflexes being eight years worse, I did manage to complete the Odyssey – but it was completing it that underscores just how difficult Runner is.

BIT.TRIP Runner is exactly what it sounds like: an endless runner in the same universe as Beat/Core/Void, with the usual tunes and power up system. As Commander Video is set forward, they can jump, slide (think Mega Man 3 and onward), or execute a running kick to clear certain obstacles out of the path. The goal is to get all the gold in each level and survive to the exit of each stage. There are three worlds of 11 stages and a boss fight, and as the game tells you immediately upon boot there are no checkpoints at all. The exit can be in sight, and if you trip over a rock it’s right back to the start. In addition to the gold that dots the stage, there are also powerups that don’t affect the Commander’s abilities but do change what trails them (from stars up to a rainbow) and adds complexity to the background music. Collecting all the gold unlocks bonus worlds that look like dead ringers for the Atari 2600 version of Pitfall, though I’ve never been able to complete one of these stages to see what if anything unlocks as one hit ends the bonus round with no way that I’m aware of to replay them. (Upon further review, it’s just a shedload of points.) 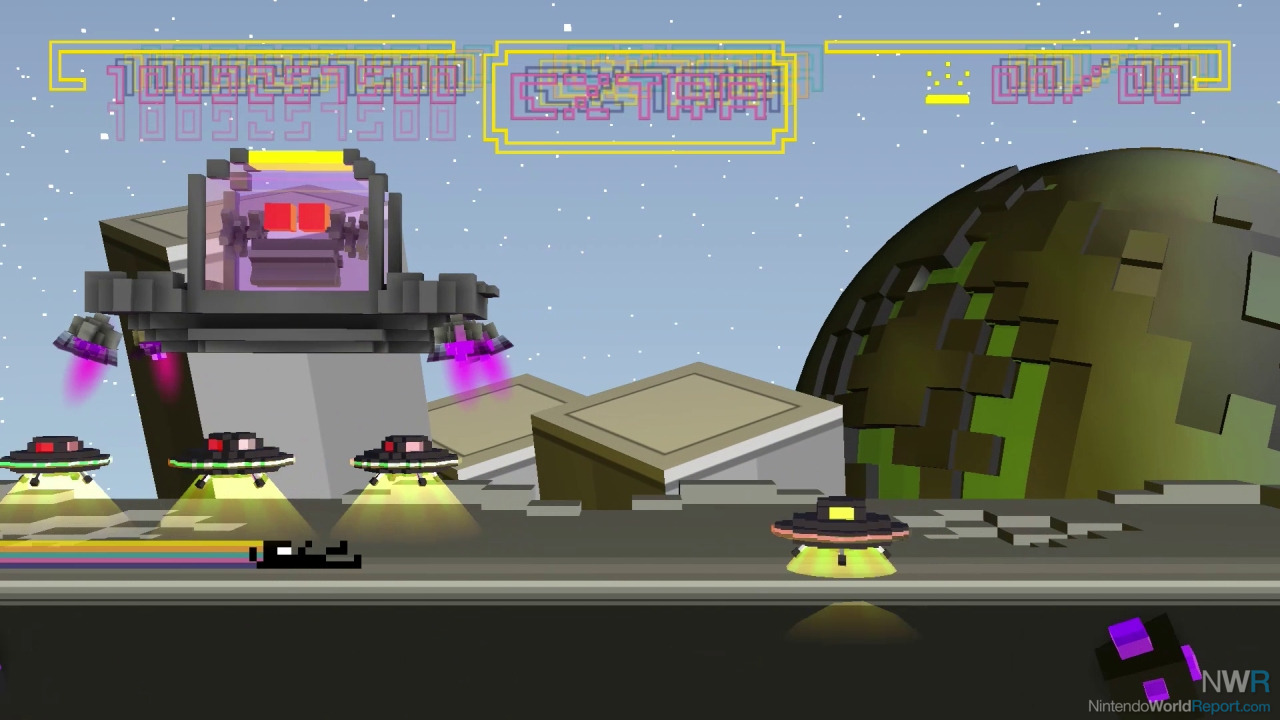 To this thing, I leave a boot to the head.

The lack of checkpoints is the key point of frustration with Runner, even if I naively picked Easy difficulty in the hope that they would be added in. It would be much less frustrating with checkpoints so I could practice the pixel-perfect jumps necessary to clear anything after the first ten stages. I eventually gave up on getting all of the gold in the infamous 1-11 stage (known in-game as Odyssey) just because I forgot what the boss stages were like and wanted to get to one. I’m not sure at my age that I’m physically capable of pulling off a 100% run of Runner because of the timing necessary to get all 93 of the golds in Odyssey. At least the game runs smoothly, which keeps the windows for moving or making commands consistent, and the game does a good job of introducing the concepts and moves Commander Video has before throwing you into a series of final exams.

Although it was originally designed to fit in the microscopic size constraints of WiiWare, Runner was later brought to PC so there is an HD conversion that looks sharp both on TV and handheld. Some of the backgrounds – especially in world 2 – can be a bit distracting, however. The soundtrack is solid, with the Commander’s moves mixing into the background music well and a nice escalation of the background music when grabbing powerups. One of the things I always remembered from the BIT.TRIP series is the throaty joy that the announcer calls out the stages of power-up with, and it’s back in all its glory in Runner.

The BIT.TRIP series took off with Runner on WiiWare, so much so that the two successive Nintendo consoles have each had a Runner sequel. And honestly, what Runner has done now is made me look forward to the Switch port of Runner 2 coming next year, because I prefer its art style and it has checkpoints. Even if they are optional. Runner’s still my favorite of the original BIT.TRIP series but if you pick up Runner you get a big discount on the other ones so it may be better to explore those instead.